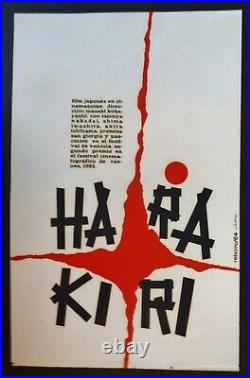 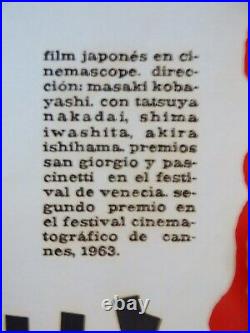 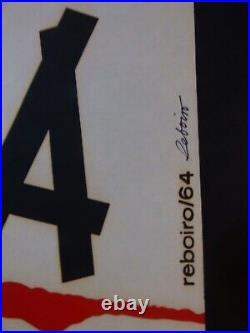 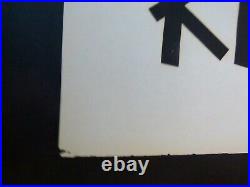 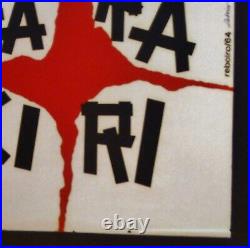 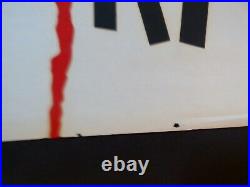 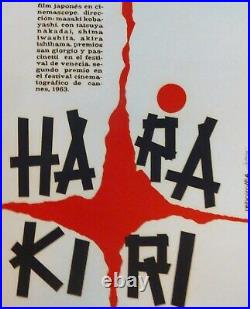 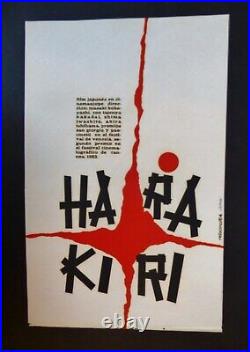 Whose work can be found in museums worldwide. This iconic, award-winning poster was designed by Reboiro in 1964 for the first showing in Cuba of the famed Japanese movie HARAKIRI (see below for a brief description of the film). The poster won first prize at a prestigious poster competition in Ceylon (now Sri Lanka) in the mid-1960s--the first major international award won by a Cuban poster artist.

The hand-signed poster we are offering in this listing was acquired directly from the Reboiro family's personal collection. Reboiro died in Spain in January 2020. Antonio Reboiro's sought-after posters can be found in many museums and prestigious private collections, including the Museum of Modern Art (MoMA) in New York City, the Victoria and Albert Museum in London, C. Entre Georges Pompidou in Paris and the. Academy of Motion Picture Arts and Sciences in Los Angeles.

A selection of Reboiro posters was on view at MoMA in late 2015 and early 2016. Reboiro's work also was highlighted in an extensive 2019 exhibition of Cuban poster art at the prestigious Musée des Arts Décoratifs (Decorative Arts Museum) in Paris. The HARAKIRI poster by Reboiro can be found In many books about Cuban poster art, as well as in important collections, including the Academy of Motion Picture Arts and Science's in Los Angeles. The curator of a 2009 Cuban poster exhibition at Georgetown University in Washington D.

Praised this graphic as a forceful and simple design, a jagged red cross [suggesting] the violent nature of the film without being explicit. Copies of this poster also appeared at a 2017 exhibition at the Brussels Press Club and a 2018 show at the Embassy of Spain in Havana. More accolades for this Cuban gem: A copy of this poster was also displayed at "Artes de Cuba: From the Island to the World, " the 2018 cultural festival at the John F.

Kennedy Center for the Performing Arts in Washington D. Another copy of this poster appeared in 2018 at a prestigious Cuban poster art exhibition at the Museo Nacional de Bellas Artes (National Fine Arts Museum) in Havana. Ull page image of this poster was published in that exhibition's catalogue--an indication that the curators considered this one of the most important Cuban posters of all time. This signed 17 by 29 inch (43 by 71 cm) poster was made in the Cuban Film Institute's silk-screen workshop in Havana in 1964, some 18 years before Antonio Reboiro left Cuba to eventually live in Spain, carrying a treasure trove of poster art with him.

As mentioned, this poster comes from the Reboiro family's personal collection. Many are true museum pieces and work beautifully well together. Overall condition of the poster we are offering in this listing is good with some imperfections, including creases on the face of the graphic and tears, holes and creases on the border.

This vintage graphic will display beautifully in a frame. [Seppuku/Harakiri], directed by Masaki Kobayashi (1962). Synopsis of film: An elder samurai warrior, instead of committing seppuku (ritual suicide, better known in the West by the colloquial term harakiri) after his lord was deposed, was ordered to stay alive. HARAKIRI, designed for the first showing in Cuba of this famed Japanese movie. SIGNED: Yes, by the artist's hand. EDITION: 1st (this is an original poster). 17 by 29 inches; 71 x 43 cm.

The ICAIC (Cuban Film Institute) silk-screen workshop in Havana, Cuba. A few words about collecting Cuba's silk-screen movie posters. For more than 60 years, the. Cuban Film Institute has been designing silk-screened posters for most every movie shown on the island, whether the films originated in Cuba, the United States, Brazil, Japan or Italy. In the midst of the Cold War 1960s and 1970s, many of the subtitled foreign films shown in Cuba came from the island nation's communist allies in the Soviet Union, Eastern Europe, Vietnam and even North Korea.

Unlike in the United States, where movie posters are often dominated by images of Hollywood stars, the Cubans assign a graphic artist to design an original piece of artwork for each film. These posters are widely recognized in graphic design circles. As stylish works of art, handmade one color at a time and often under difficult circumstances at various times, paint and even paper have been in short supply on the island. Cuba's silk-screen movie posters are nothing less than museum pieces. Examples of Cuban poster art can be found in the permanent collections of museums across the globe from the Victoria & Albert in London to the Museum of Modern Art in New York, as well as in prestigious institutions such as the Library of Congress in Washington D.

And the Academy of Motion Picture Arts and Sciences in Los Angeles. Adding to their collectability, Cuba's movie posters are produced in relatively small numbers. Typically, a few hundred copies are made for each film, although the runs have been as low as 50. Responding to demand from collectors, the Cuban Film Institute has re-screened some of its more popular posters. That's why some posters created in the 1960s and 1970s began reappearing on the Caribbean island in the 1990s and 2000s.

Further adding to their collectability, many of Cuba's vintage posters are imperiled. To us, these survivors are rare beauties, even those with obvious flaws. We are proud to have rescued hundreds of posters from almost certain extinction by storing them in an air conditioned, acid-free environment.

We consider both to be collectible, and (in response to a question we often get) all of these posters were legally imported because the U. Government exempts artwork from its economic embargo against Cuba. While the pricier originals are favored by some collectors, the re-screens are also collectible because they were made in the same Havana workshop as the originals.

Note that we never sell unauthorized reproductions that have been cranked out in print shops in the U. This item is in the category "Art\Art Prints". The seller is "cubanpostergallery" and is located in this country: US.

This item can be shipped worldwide.