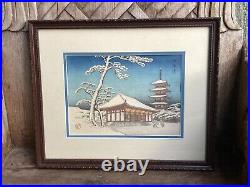 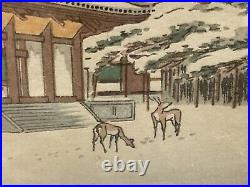 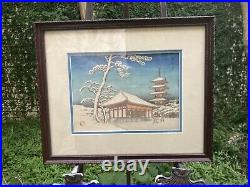 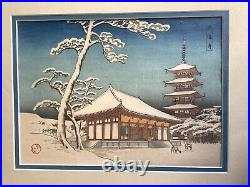 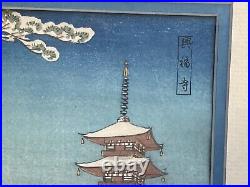 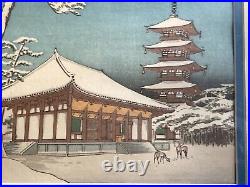 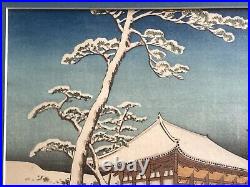 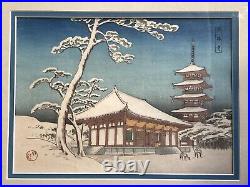 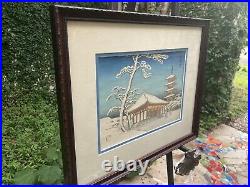 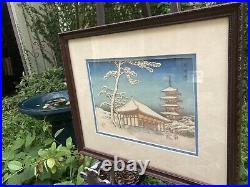 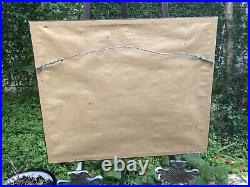 Beautiful and rare woodblock print of the snow covered Kofuku-ji Buddhist Temple??? Kofuku-ji in the city of Nara, Japan, depicting the temple and famous Nara deer that roam near it. Koban size (roughly 9" x 7"). This print is from a rare and relatively unknown series of landscapes by Konobu III published by Uchida in the 1950's from what I have discovered. Sadanobu Hasegawa III is best known for images of people and animals, creating wonderful depictions of cats, kabuki theater, bunraku puppet theater and scenes and events from Japanese legends and medieval history.

He was born in Osaka as the son of Sadanobu II. He was the pupil of Shijo painter Ueda Kocho, and later became a pupil of Utagawa Sadamasu, becoming a member of the Osaka school.

Most of the woodblock prints by Sadanobu Hasegawa III were made after World War II and published by Uchida. The print is nicely framed and the back is sealed. I have not opened the back to verify the method of mounting or to examine the back of the print. I did not wish to compromise it in any way, but I feel confidant it was handled properly based on other acquisitions with similar provenance.

Acquired from the estate of a medical doctor. In Frame: 14"w x 12"h. This item is in the category "Antiques\Asian Antiques\Japan\Prints". The seller is "gaily2760" and is located in this country: US. This item can be shipped to United States.