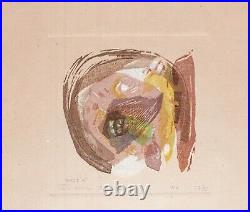 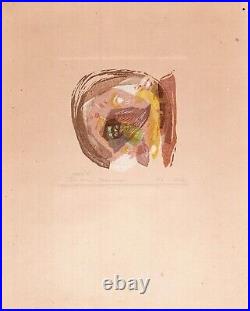 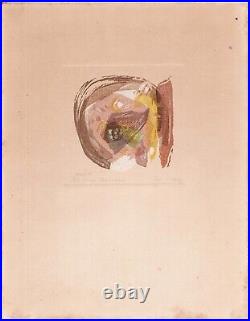 Good condition with no tears, rips, holes, repairs, wear, paint peelings or losses, tiny scattered aging spots on the margins (well away from the image) consistent with the age and use, aging stains at the bottom edge (invisible once framed). Was one Japan's prominent sosaku hanga artists. Combining the influences of abstract Modern art of the West and the traditional subjects of his native Japan - namely the gardens of Kyoto - Takahashi's delicately overlaid designs create an atmosphere of stillness and balance inspired by the changing of the seasons and subtleties of light. The son of a nihonga painter, Rikio Takahashi was born in Tokyo in 1917. He studied woodblock printing with Koshiro Onchi and was an original member of the Sosaku Hanga or "creative print" movement. Takahashi worked with Onchi from 1949 until his teacher's death in 1955. Takahashi was a member of Nihon Hanga Kyokai (joined 1952), Kokugakai and the Graphic Art Club. He exhibited his work in international competitions and exhibitions. During the 1960s, Takahashi spent two years in California. He believed that art was primarily a form of self-expression. Creating a unique style, he pioneered unorthodox printing techniques to make largely abstract works with distinct tonality. Kyoto's gardens served as inspiration for much of his work, feeding into his fluid, abstract style. Each design is self-carved and printed, true to the spirit of his teacher Onchi.

By 1930, it became the standard wood used by Sosaku Hanga artists. With a light grain, artists could engage with surface texture or achieve unmarred smoothness. Takahashi worked largely with shina-faced (veneered) plywood, another readily available and affordable wood. He explored, through abstraction, the forms, textures, and colors found in gardens and nature. Especially the classic gardens of Kyoto.

Much of Takahashi's work is lyrical in mood (some of his print titles include English words such as "lyric" or "nostalgia"), although there is a greater variety of expression in Takahashi's oeuvre than perhaps some have realized. Certainly, there are works of assertive gestural power that express forces in nature other than tranquility. Takahashi, born in Honjo Wakamiyacho, Tokyo, was the son of Takahashi Tarao, an artist of the Nihonga school Japanese-style painting.

He always considered Onchi as his only mentor, with their last meeting taking place in 1952. The school had just been integrated into the California Institute of Arts (now in Santa Clarita) in 1961 although it retained its name until its relocation in 1970. Print studio in Los Angeles (established in 1965). All told, Takahashi made four trips to the U. Where he had 18 solo shows.

In 1958, Takahashi had his first solo show at the Yoseido Gallery in Ginza, Tokyo. Recalling that time, he said, I put a Japanese aesthetic sense, which I had previously suppressed, into the work I showed on this occasion. This sensibility was nourished by several visits I made to Ise, Nara, and Kyoto during the period of spiritual emptiness that followed the war. Trees ruffled by the breeze, ponds and rocks, the sound of water - these were the things that had restored my spirit, and I made a deliberate attempt to capture them in my art. Akahashi's technique was representative of various experimental approaches toward printmaking adopted by the postwar sôsaku hanga artists.

Statler, Oliver: Modern Japanese Prints: An Art Reborn. Takahashi Rikio: "Reflections on the Path of Printmaking, " in: Rikio Takahashi, The Woodblock Prints. Around this time, after meeting the president of the International Graphic Art Association (IGAS) of New York in Tokyo, Takahashi received a large order for his prints from American buyers, and soon after four more orders were received. Encouraged by this response, Takahashi made his first trip to the United States in 1962. Print studio in Los Angeles. That same year, in September, he was admitted as an extension student into the Chouinard Art Institute in the Westlake district of Los Angeles, where he studied ceramics and casting technology. The school had already been integrated into the California Institute of Arts (now in Santa Clarita) in 1961, but it retained its original name until its physical relocation in 1970. Takahashi's technique was representative of various experimental approaches toward printmaking adopted by the postwar.

Faced (veneer) plywood, Takahashi would partially overlap blocks and print with thin watercolor ink, creating distinct tones. He was adept at printing subtle overlays of one or more colors, creating varied opacities and textures that he punctuated by a range of shapes. Masayoshi Homma has written: To preserve the integrity of colors, each block is printed partly over a white area; darker tones are usually the result of several overlappings. Takahashi almost never uses colors close to the primaries. He uses an abundant variety of subdued mixtures, subtle variations of warm browns, cool water tones, and greens resembling the feathers of the bush warbler greens.

These are all colors typical of Kyoto. Their constant luminous quality is a characteristic of Takahashi's work that might be considered a reflection of the calm and elegant Yayoi aspect of the Japanese spirit. Beginning in 1970, there was a sudden appearance of bright areas of red and red accents that give a finishing touch to the composition.

There are brief glimpses of a free spirit which break the tension of carefully maintained balance. Takahashi once said, It is impossible to speak about my work while looking at a book or photographic reproductions of it. It is like scratching a place that itches while wearing an overcoat. Flat printed reproductions are different from the actual work.

My prints are made with the water-based mineral pigments called. Which are used in Japanese-style painting. The pigments are rubbed into the physical volume of the paper with a. And this produces an effect essentially different from a picture printed flat and clean with a machine. Also, the colors in the reproduction are always slightly different from those in the original. All forms of Japanese culture are structured as a. The prescribed path must be taken to approach these practices. The way of the sword. The soft way of wrestling. In 2007, Takahashi's eldest daughter presented the Museum of Modern Art, Kamakura & Hayama, Japan with approximately 500 of her father's works dating from the 1940s through the 1990s. Sixty of these prints were selected for an exhibition titled "Lyricism of the Woodcut: Takahashi Rikio Retrospective". ISRAELI BUYERS MUST ADD 17% V. We guarantee all items we sell are 100% authentic! This item is in the category "Art\Art Prints". The seller is "artshik" and is located in this country: IL. This item can be shipped worldwide.