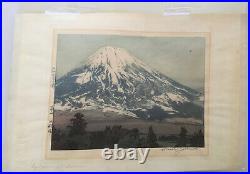 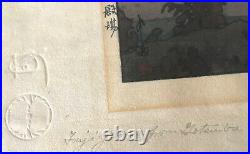 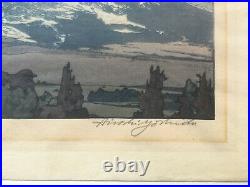 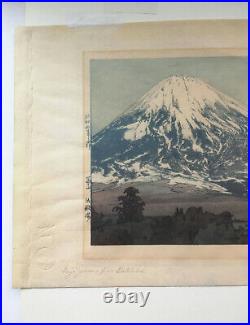 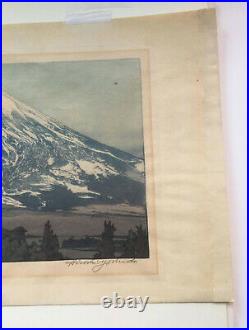 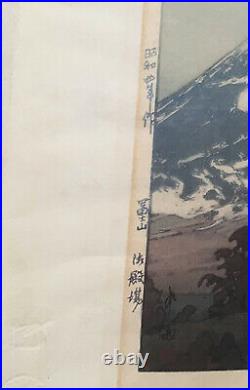 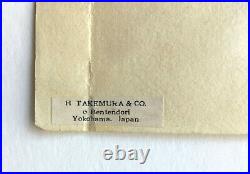 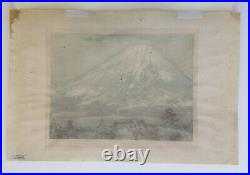 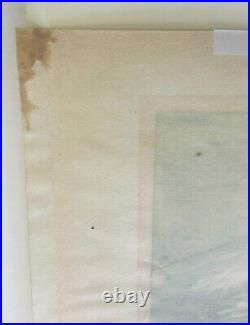 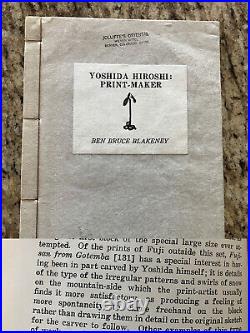 The date, "Showa Yo Nen Saku" (Made in the 4th Year of Showa [1929]) at left border. Rare two impressed stamps, one a seal, Hiroshi, and the other a printer's rubbing pad, at left. Small paper label on verso reads.

45 Sanchome Bentendori, Yokohama, Japan. The jizuri seal was not used for this print. Printed by the artist; blocks cut by Maeda.

Some toning, crease on left and right from folding to fit in narrow frame, small section dark toning on upper corner border, little wavy paper and age toning due to the matting process, small spot of residue upper right on print, (see pictures). Overall good condition woodblock print from post devastating Great Kanto Earthquake. This is a very rare woodblock print from Hiroshi Yoshida and is being offered at a price reflective of the vintage condition. Blair's 1930 "Toldedo Exhibition" #266.

In his 1939 book, Yoshida notes that 8 blocks were used with a total of 22 impressions, and that the key block was printed 4 times. Fujiyama from Gotemba' Hiroshi Yoshida carved blocks and printed himself Paper size 15.5" x 10.25" Image size 10" x 7.5". Fuji san from Gotemba has a special interest in having been in part carved by Yoshida himself; it is details of the type of the irregular patterns and swirls of snow on the mountain side which the print-artist usually finds it more satisfactory, as producing a feeling of more spontaneity, to carve freehand on the block rather than drawing them in detail on the original sketch for the carver to follow.

It's a unique print because he uses the Baren and signature impression on this print. Only a few other designs use this. There has only been one printing on this, so no posthumous prints. Hiroshi Yoshida is considered one of the leading figures of the renewal of Japanese printmaking after the end of the Meiji period (1912). The renewal was based on two groups of artists, the Shin Hanga (modern prints) and the Sosaku Hanga (creative prints) movement. Hiroshi Yoshida was born on September 19, 1876 in the town of Kurume, in Fukuoka Prefecture, Japan as the son of an elementary school principal.

His artistic talent was discovered early and at the age of 18 he entered a private art school in Tokyo. Hiroshi started as a painter and soon won many art exhibition prizes. But it was not before 1920 that he began creating woodblock prints. The traditional process of creating Japanese woodblock prints was a cooperation of three strictly separated skills: the artist who designed the print subject, the carver and finally the printer and publisher.

In contrast to this traditional approach, the Sosaku Hanga followers believed that the process of creating a print - design, carving, printing - should be performed by the artist himself. Although Yoshida Hiroshi is usually considered as a member of the Shin Hanga movement, he followed the same ambitions of creating a print by himself. In 1923 Watanabe's store was completely destroyed in the fires that followed the Great Kanto Earthquake.

All of Yoshida Hiroshi's wood blocks and more than a hundred of his prints were lost. After coming back from his third visit to the United States, Yoshida Hiroshi started employing his own artisan carvers and printers in 1925.

He supervised them very closely and often he carved a block himself. He thought that he had to be more skilled in all aspects of producing a print than each of his workers.

This item is in the category "Antiques\Asian Antiques\Japan\Prints". The seller is "flamingdealsstore" and is located in this country: US. This item can be shipped worldwide.